Custom press is no longer the poor relative of commercial press. The trend is actually beginning to alter. Large commercial publishing houses are trying or planning to hit the custom market. The best and most experienced graphic designers or photographers are starting to work for the sector. But one quality remains to be characteristic of custom press – the publishing multivoice. 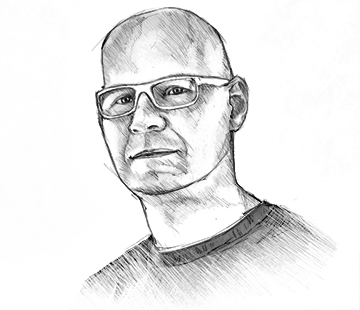 Graphic artist who is not afraid to suggest unusual solutions to his customers. 15 years ago he gave up a job in commercial media to start his adventure with content marketing. His graphic creations are appreciated not only by Aude customers, but also jurors at international competitions, e.g. in New York and London.

Twelve years ago when I joined the sector nobody was using the term “custom publishing”. Custom magazines were mostly made by amateurs. Corel was the tool to make them. The untamed imagination of so called computer graphic designers was giving amazing forms to those publications. Other graphic forms rules were transferred blindly to press magazines, resulting in horrible visual effects, such as a photo-size logo on each page, company colours as the background for the text on each centerfold etc. The basic text editing forms, such as the lead, diversifying the text into basic, frame, photo caption, were not used.
Today, the world has changed. The market has now civilised. To me it is telling I no longer hear the hated term “computer graphic designer” or questions such as: How many computer graphic designers does your agency have? I used to strike back saying: How many pen editors work for you? Or: Did you manage to find a computer proofreader? Today, we simply have talented graphic artists and designers. The awareness of the role of an image in achieving goals is increasing. This is a sign of the times. Corporate manuals principles are being used more fluently and wisely. Custom magazines for employees are appearing, such as @mazing by Netia, which have a perfect symbiosis of content, visual message and strategic goals of the publisher-customer. There is one area, however, which does not change. All these experiences make us graphic artists, bulletproof tough guys. One of my masters back in the G+J publishing house, which by the way is about to fade away from the Polish market, used to say: The press layout is like a poker game. If you can control yourself, there is no deal you can’t win. I remember that sentence all my life, which has become my credo together with the conviction brought away from the Fine Arts Academy that there is no such thing as good taste.
Custom publishing brings unexpected situations. We often deal not with evaluating a taste or having to agree to it, but with the fact there are several totally different tastes on the other side of the table. One project, but no publishing leader – one person that would take responsibility for the aesthetics. One person wants the line to be straight but her colleague wants it to be rugged. Somebody’s dream about pale pastels is clashed with the expectations of someone who loves juicy and sexy colours, if of course the company manual does not specify that requirement. How do you win when you have not one player against you, but several players with completely different cards? I guess there’s no one good solution. I try to suggest to the publisher: Dear publisher, choose one responsible representative from among yourselves. Let that representative think about the universal recipient of your publication and let him or her use those criteria in contacts with the agency. Make that person forget about their own taste in favour of the common good or make him consequently impose his opinion and pacify the rest – anything it takes to make them speak with one voice, no ventriloquism.
1. Dear customer, you will gain much if you say you don’t like something and want something different, instead of saying it is ugly. You won’t discourage or make the graphic designer depressed, but will place a new challenge in front of him.
2. Nothing raises the morale of a graphic designer as much as perceiving his or her work as a challenge and creation. If you put it this way, you can really count on their enthusiasm, zeal and commitment, and nothing brings a better visual effect.
3. Keep in mind that although “taste” is a relative thing, there are certain principles in the art of designing and “a feeling” for it. It is like music. There is no “serious” or “popular”, only good or bad. That’s why you need to listen!

The text appeared in the magazine Content Marketing Polska 2013.

What do you do when one person wants the line to be straight but her colleague wants it to be rugged?