Is there a point of telling a story – that takes longer – if you can simply enumerate your points? Well, there is. A good story is like a lollipop: who'd want to sprinkle their tongue with sugar if they can have a scoop of sweetness on a stick? A lollipop gives you pleasure that lasts… and you want it to last for long. 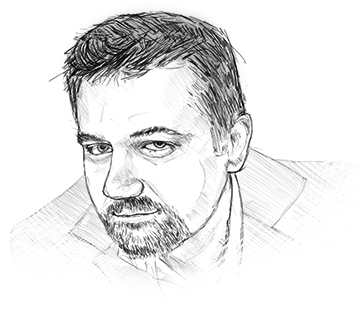 Scientist studying the art of speaking and writing effectively (he teaches social communication and narrative theory at University of Warsaw), and an expert helping brands create stories (owner of Narrative Impact). Being a fan of the words "rhetoric" and "narrative" he wrote several books about them. He likes to support his words with data.

1. It was another ordinary day. People were heading to work at one of the leading American IT companies. A long black limo swooshed by and parked on the other side of the street, opposite the impressive entrance. The CEO got off. He was actually one of the company founders. He usually took the stairs leading to the main door. On that day, just like always, he was about to push the glass door, when suddenly he heard: “I’m sorry, sir, but I can’t let you in without your identity card.” The security guard, who has been working for the company for years, was looking straight into the CEO’s eyes, without a blink. The CEO was stunned. He reached into his pocket, but must have left the badge at home. He looked once more at the guard’s poker face and thought for a while. Finally, the CEO turned and walked back to his limousine. The guard stood still. He did not know yet tomorrow he’d be promoted to the head of security.
This story is often told in companies, also in Poland. You could of course cut it and say: fulfil your duties no matter what or who you deal with – but that’s just sugar. To raise emotions, to see the abstract message in practice, you need a story. A story allows to make a strong impact: if you take rules seriously, you’ll get a reward; in a company everybody is equal when it comes to rules, and a regular worker, who fulfils his duties well, is just as important as the boss. The story gives you the pleasure you don’t get when you only learn the rule. Besides, you get a chance to identify with the awarded employee.

Is there a point of telling a story – that takes longer – if you can simply enumerate your points? Well, there is. A good story is like a lollipop: who’d want to sprinkle their tongue with sugar if they can have a scoop of sweetness on a stick? A lollipop gives you pleasure that lasts… and you want it to last for long.

2. When we watch someone, or read about a protagonist with a flushed face, see him or her on the screen or listen about someone unusual, we are moved when something important happens, we fear for our protagonist, we want that person to win. Why? Because we activate mirror neurones, responsible for recognising other people’s emotions and intentions, that is empathy. We support our protagonist.
When a character in a story faces obstacles, he or she needs to make a choice – either act or give up. The choice depends on that person’s values. If it is a scrupulous security guard, he will not get frightened by the boss and will do his job. The secret is to find a good message and characteristics of the protagonist to make the readers identify with him. If the obstacles are too small, we won’t be interested in the way he dealt with them. Some PR specialists are so afraid of talking about some obstacles, fears or weaknesses that the story becomes dull. If the sun is always shining the character can’t take any action that would display his qualities. We lose a chance to get people interested in his story, and to present his qualities.
People will always tell stories, also in companies. Just listen to them during their breaks. If their stories are better, more interesting and told by colleagues – and thus alternative to company values – the efforts of custom editors will be useless. But if you join the story telling system of your employees, communication will be coherent.
3. When card games champions want to remember a random sequence of cards, they use human brain’s natural ability to remember stories. How do you do this? We divide the pack into threes, and each card becomes a hero – if you have a King, a Queen and a Jack, it is easy to remember a sentence such as: The King surprised his Queen with a Jack. A question that allows you to remember things even better is “Why?” Think about who did what and why. When we know what the motivation is behind people’s actions, we better understand what they do and can remember the story easier – and possibly pass it on to others. If we know the motives (in the case of our security guard – regulations), the values (diligence and no exceptions rule), the results (award from the company) – the chance we’ll remember the story is higher. There is one more thing – emotion. We care about what will happen to the guard in his clash with the boss. It turns out he is saved by values, and we feel relieved. This is the moment when the message gets on fertile soil. The protagonist’s values that we identify with become our own values.
4. Numbers in tables in Excel can mark out rational goals, but do not have the power to inspire. They won’t make us feel like a tight team where everyone will stand for everyone. They won’t make you imagine your victory, which is not only company revenue but also a symbolic change in the world. So instead of giving commands such as: “increase revenues by 5 percent,” you sometime make it more dramatic. If the employee understands the intentions of the command and is able to match it with a well-known story, the better and with greater engagement will he perform – as they will engage his employee identity.
To sum up, storytelling helps you create a situation in which your company is on the light side of the force, and our actions save the world (even if you only create computer programmes).
A well defined story will bring your company to the front pages in the media, if only its goal is to fight for the consumer’s freedom. One example of this can be declaring war to Apple by one of Google vice presidents, Vic Gundotra. During a Google I/O conference Gundotra said: “If we never decided to react, our future would be sad, ruled by one man, one phone and one operator. We don’t want the world to look like that. Hence the Android.” The latest market data prove this attitude is bringing effects to Google: in the first quarter 2012 more devices with the Android were sold in the USA than with iPhone iOS.
5. In today’s marketing we tell less and less about the product, but more and more about the consumer. Products are gradually becoming similar, and technologies often differ so little that only an expert can be excited by novelties. What remains is the emotional relation, the company’s symbolic values. If you have a bunch of guys all driving similar cars, going to almost equally expensive hairstylists, have the same clothes and all speak the same language, what becomes crucial is the story behind them. What narration they choose to tell their chosen one about the future. If they focus on themselves, it’s good – but it’s even better if they focus on her: how they can help her reach her goals, how they can change to her liking.

The custom press often concentrates on the presentation (sometimes too sweet) of its financing source. It rarely allows the reader – whether it is an employee or a consumer – to become someone important, proud, more beautiful. And so we can be a lame duck who is waiting to be saved from toilet bacteria by a WC liquid. We can be a hero who takes care for his child not taking up the passive entertainment model. We buy Lego because it is creative. We can be a benefactor who sponsors a ball for little cinderellas from a children’s home, where some private prince can find them and offer them a job in a small store. We can be the guards of a treasure such as an old beer recipe, or give a magic object to our chosen consumer to enhance his abilities and allow him to make his dream come true. We build closeness between a company and a consumer not with a great product, but with its story. The product transfers emotions relating to individual goals. Every one has some kind of a journey, some dragon or a ball to be at. Thanks to a story, there appears a brand on the way to those goals.
6. A classic fairytale tells about a change – the ugly duckling changes into a swan, Cinderella into a princess, or a miller marries a princess. They go through a change because they have something special to offer. Each company wants to find something like that – something that makes a difference to customers. Only when we identify with the character can we share his values. The value board itself, even if it is hung above each door so that employees can view it every day, will not bring the effect. Let’s get back to the story of our princess who was dreaming about making lollipops, but her evil stepmother was making it impossible, until… there came the market owner and saved the princess and gave her freedom. Isn’t that the pattern of business coming out from the communist goo of socialism? Or maybe this is a metaphor of a developing computer company, who managed to separate from a large group that was using it for vile purposes? When the company met a good investor it developed as much as it could…
Storytelling is about finding a good narrative structure, the good message and conflict. Then you only need to choose characters and plot to tell the story. This is how you change people. They become – like in Google’s story – fighters for a better world. This is more than production and sales process. This is about being on the light side of the force.

Once upon a time, somewhere not that far away, there lived a princess, who was very, very bored… All day long she would be catching flies and dream. She dreamed of making lollipops. The beautiful princess had an evil and jealous stepmother, who wanted to steal her business idea. Because of the stepmother's intrigues, the lollipop dream was fading away. And one day, there came the owner of the Wasilewski candy store. He looked at the princess and… he wanted a lollipop right away.