May you live in interesting times – of digitalization

There are bars at airports where you place an order via tablet. This is possibly the worst experience you can get in an unknown environment – a complete lack of contact with humans. Where is the world heading? Is artificial intelligence (AI) going to take control? Will it take over our jobs? Is Huxley’s vision from “Brave New World” going to come true? The speakers at the hub.berlin 2017 conference attempted to find the answers to these questions. 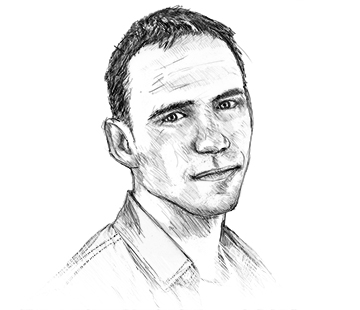 Master of ceremonies, every printed work by Aude has to go through his hands. Expert on the mysterious CMYK, RGB, DPI and other punching dies. Aude legend has it that Tomek can do anything. Each of our editors is pursuing the icing on the cake – getting with her article to Tomek (i.e. sending files to print).

I regret I wasn’t able to hear all the speakers, because the lectures were taking place on five different scenes simultaneously, and you had to decide quickly which one to choose. But I was able to realize that they all agreed on one thing: nobody today can be sure of what the future will look like. Even the near future. Do you remember movies from the 80s and 90s? Those flying cars, hoverboards, interplanetary transport for people, laser guns… This is what the creators thought our times would look like. And look – none of these has come true.

Glasses instead of smartphones?

But it’s not that bad. Homo Sapiens is a species that doesn’t lack ambition and imagination: technology is speeding up, and it’s not a straight line, while computers are becoming more powerful. Dr Christian von Reventlow of Deutsche Telekom projects that by 2050 we will be able to build a computer as powerful as the human brain, and instead of smartphones we’ll be using glasses displaying all the information we need about the world around us. The access to the Internet will be the fundamental human right, while TV sets as we know them will become relics.

Imagine city ads which adjust the content to every approaching person. Today, young people can’t imagine the world without the Internet. I’ve heard if they were to choose between their friend and their smartphone, some would choose the latter. How about artificial intelligence that can reproduce? Experiments are being conducted on machines which can adjust to the setting and modify their structure to move more efficiently. All this to be able to study the surroundings even better. It is planned to use such machines in terraforming and studying planets in our galaxy.

Sounds interesting, but there are dissenting voices, too. How can one control a being which works 24 h a day 7 days a week and is improving constantly? What if AI turns against people? What chances does a man have fighting against an army of robots controlled by AI or by other people? One of the speakers compared such combat asset to chemical weapon, which is forbidden, and he would like AI to be subject to the same provision.

Imagine city ads which adjust the content to every approaching person. Today, young people can’t imagine the world without the Internet. I’ve heard if they were to choose between their friend and their smartphone, some would choose the latter.

3D print is another innovation that is getting more and more popular. Denise Schindler lost her leg in a train accident. She received a new leg from Autodesk, a company which printed a prosthesis for her in the 3D technology. The artificial leg was so great that the woman won a medal in cycling at the Paralympics.

Another example: a device is being tested for tracking eye-ball movements, which can help understand how we read, what we pay most attention to: text or infographic? Which elements catch the eye? It turns out most people read in the so called F-shaped pattern.

Using this technique subconsciously, we also like paying attention to large numbers, if they are placed at the top of an infographic. This is valuable news for graphic designers, editors and publishers: if they want to draw the reader to an important piece of information. They should avoid the right bottom part of the page, which is where we tend to look least often. The exception is a human figure placed in the right bottom. A human figure or human face never loses popularity. But does this preference influence our active reading and our genuine interest in the content? Studies are underway.

What about traveling around the city of the future? Will there be holdups, like today? The ideas mostly circle around eliminating the man’s favorite toy: the car. Bicycles are doing very well in the cities. Is car sharing going to be the next step? It doesn’t seem completely impossible – it’s getting more and more difficult to move around in a car due to the growing number of vehicles in the streets. One of the current proposals is to increase parking wages in city centers, driverless cars are undergoing tests – but this is still distant future. Uber is offering flying taxis. Maybe in 20 years flying cars will be everyday reality? To me, this still sounds like science fiction. A more probable thing is a parking app. They say 30 percent of traffic in cities is generated by vehicles looking for a parking space. Wouldn’t it be great if an app could find a space, “book” it and park your limo without driving around endlessly?

Maybe in 20 years flying cars will be everyday reality? To me, this still sounds like science fiction.

An alternative for business face-to-face meetings and the related commuting is videoconferencing. However, such “meetings” lack one element which is an important part of personal contacts – emotions. And here comes the solution: virtual reality. Despite the distance between the talkers, the meeting seems more authentic, because in a thus created world you can feel the vicinity of another person.

Another step towards virtual reality will be the so called holo deck. Remember “Star Trek”? They’ve thought about such a room. Can we build something like that? And will virtual reality eventually replace television? How will it impact storytelling? Stories will be much more gripping if we can feel them with our entire body, right? People are trying to build a “suit” which allows to feel the objects that you touch virtually, or even the surrounding temperature.

Today, standard information sharing on the Internet is through HTML5 websites. But all those fantastic ideas need something new. The bulb wasn’t invented thanks to studying candles. What will it be? We’ll wait and see. Just watch, the pace of changes is speeding up. 10 years ago there was no spotify, snapchat, smartphones, iPads, Uber. YouTube, Facebook and Twitter were making the first steps. There are interesting times of digitalization ahead.

Despite the distance between the talkers, a virtual meeting seems more authentic, because in a thus created world you can feel the vicinity of another person.